Mullakkal Devi Temple is a Durga Devi temple in the Arangotukara - Ezhumangad twin village. This temple is in Ezhumangad side, though it is known as Arangotukara Mullakkal Temple. This temple is private temple owned by Kannathu Nair. The present owner is C P Sathyaseelan (Kuttan), a retired employee of Air India. The temple is small. It is on the left side to the village road - Puthan Patha while going from the main road to Kadukasseri Village, just about 50 yards from the main road. 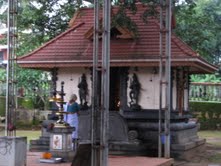 Thaalapoli is the main festival of the temple. Which is on the completion of 41 days' Chuttu Vilakku (light lamps around the temple) starting from the 1st of Vrischikam month of Malayalam Calendar. During the chittu vilakku period the velichappadu will go around the houses in the village and around for 'parayeduppu', where people offer paddy and money as contributions to the festival. Usually this will be during the end of December. The pooram/thalappoli is a procession of ladies traditionally dressed carry a plate with a lighted lamp and other items. There will be 2 rows of the ladies carrying thalapoli. The procession of the ladies follows caparisoned elephants with one of them in the center carries the idol of the deity. The procession starts from the the main temple of the village, the Karthyayani Devi Temple of the village. The procession will start with a Thayampka( a long drum played to produce rhythmic sound)  and Panchavadyam (an orchestra producing rhythmic sound). It will end at the Mullakkal temple. There also there will be chenda vadyam with an oracle (Velichapaadu - a male with long hair dressed with auspicious red color dress carrying a sword in right hand and chilambu - a brass hollow oval shaped ring with small balls inside which makes sounds when the balls move) beleived as the representative of the goddess, who perform dance jumps to the rythem of the chenda. For the pooram there will be about 15 to 30 elephants participating in the procession.After the procession reaches the Mullakkal temple The velichappadu dances and after that the ladies will keep the thaalams (plate with lamps) in front of the goddess. After that the pooram will have other performances by pootham, theyyam and other fold arts.
Posted by A R Ramanathan at 10:31 PM